Waiting for my real life to begin. 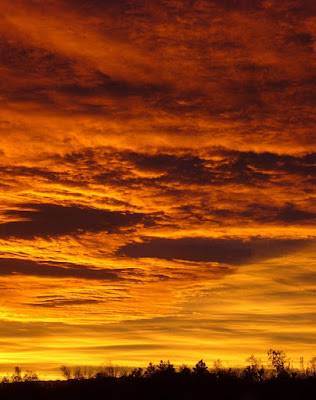 I've been told I'm not normal. I sleep too little or too much. My light is usually on when all other lights go out, and though I'm perceived as being a public personality, I'm in fact incredibly private in some ways. When people ask me what my dreams are or how I define success for myself I do not trust to hope and avoid fully answering. I think, "Who's business is that anyway?!"   ~_~   I'd be lying though if I said the fever dreams of success and the fear they awaken, doesn't frequently snatch sleep from me so late, that the light creeps over the rolling hills behind my house, and I abandon my bed to watch the sun rise.


I smell the cool morning air, listen to the birds chirp and remember my younger self. She would romanticize a moment such as this. The so called struggle of the artist. For she has seen it in the books and movies she pours over. This would be the moment in which a character would usually find themselves reflecting and coming to some great epiphany about their lives. Some supporting character might be there helping them solve some problem and inevitably the solution would come like a storm in spring. They would figure everything out and the book, series, or movie would leave them at the high point of their journey and understood positive upswing. I've come to understand more and more that those single scenes in stories really represent for most, years and years of internal struggle and difficulty. But real life stories aren't fast and sexy like book and film.

Its easy to think that that is how life works when you see only fragments of people's lives. The confident and sure veneers. The ones that say, "Look at me! I'm normal and put together, well liked and generally useful to the world." It's easy to be seduced by this simple idea that life goals are meant to be easily won and that mental challenges and basic struggles with motivation, time, and skill sets are personal failings that are entirely due to you just inherently sucking where everyone else succeeds. I think that's why this idea of "Normal" is so popular and so disempowering. Its just a mirage; a hierarchy that the herd subconsciously decides upon and then agrees to based off of what appears to be lowest risk, highest reward, or at least what is predictable.

We humans love our hierarchies...

And so the meandering thoughts tantrum until listening to the birds awaken and taking in the glowing greens of the leaves kissed by new light somehow silences them all and I find a still peace.

I listen to "Waiting for my real life to begin" by Colin Hay and cry tears of relief, hearing my life in his song and for those 5 minutes and 40 seconds, feeling a little less alone in my experience of the world.

I don't wish to be stuck here. But maybe I just have to be patient and persevere. I can't help but thinking I'm at the part of the movie right before the tensions are released, I just have to keep pushing forward. and stop waiting for my "real" life to begin, like everyone else seems to be. I'm living it. And it is as unique and beautiful and as common and basic as the bird songs, the leaves, and the morning light.


Posted by Unknown
Email ThisBlogThis!Share to TwitterShare to FacebookShare to Pinterest