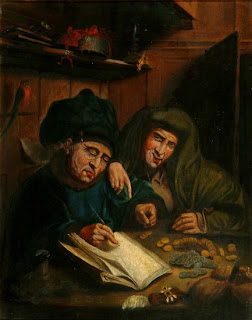 My wife and I are currently studying the informal credit market in Morocco as part of a worldwide study aimed at improving the provision of microfinance. It has gotten me thinking about usury, a term which by the original Latin definition simply means the charging interest on loans, although more recently it has referred to the charging of unreasonable or deceptive amounts. So is usury good (going by the original definition)?

It has a mixed and controversial history. Since Wikipedia has an excellent recap of it, and since I just lost 2 hours worth of work writing about it, I will just give a brief outline. Some of the ancient civilizations, including Ancient Egypt and Mesopotamia saw it as legitimate and natural, within certain limits. More recently, philosophers, prophets, clergy, and others have considered it wicked and exploitative. The Torah allowed Jews to charge interest only to foreigners, which led to them being the primary financiers (and scapegoats) during much of the European middle ages when they were denied entry into most other occupations. Jesus never explicitly forbid it, although he did make numerous references to charity. The Quran on the other hand explicitly prohibited usury.

"Those who charge usury are in the same position as those controlled by the devil's influence. This is because they claim that usury is the same as commerce. However, God permits commerce, and prohibits usury. Thus, whoever heeds this commandment from his Lord, and refrains from usury, he may keep his past earnings, and his judgment rests with God. As for those who persist in usury, they incur Hell, wherein they abide forever

God condemns usury, and blesses charities.God dislikes every disbeliever, guilty. Lo! those who believe and do good works and establish worship and pay the poor-due, their reward is with their Lord and there shall no fear come upon them neither shall they grieve. O you who believe, you shall observe God and refrain from all kinds of usury, if you are believers. If you do not, then expect a war from God and His messenger. But if you repent, you may keep your capitals, without inflicting injustice, or incurring injustice. If the debtor is unable to pay, wait for a better time. If you give up the loan as a charity, it would be better for you, if you only knew."

Which leads Sjona and I to our current predicament. It is incredibly difficult to research informal credit in a country (Morocco) where informal interest is both illegal and forbidden by Islam. Yet, there are microfinance institutions and banks, many of which charge interest. Many people choose to put their money in a non-interest bearing account. Also there are some Islamic banks that will lend money as an "investment" and will share in the profit or loss incurred, which is different than interest which must be paid regardless of the success of the enterprise. This system is a clever work-around, but it still leaves some difficulties. What if a family wants to buy a house that they plan on living in, how is a bank going to "invest" in that?

But is the alternative really better? After the most recent financial crises, many around the world regard financial institutions, from banks to credit card companies with suspicion. From the proliforation of subprime mortages to exorbitant hidden credit card fees, this suspision is well justified.

Many economists would argue that the charging of interest, properly regulated, is crucial for an economy to grow - that in a decentralized economy the interest mechanism directs capital to be spent where it is most productive, in the most efficient manner. In a modern capitalistic economy, it is because of interest, and the banks profit motive, that I can get a mortgage to buy a house, or get a loan to start a business. Who else would be willing to lend me that much money, my rich parents?

In microfinance, there has been an ideological struggle between those that support microfinance as charity and those that support it as business. While charity might offset the high cost of microfinance for the poor*,  many argue that it is not sustainable and will have a limited impact overall. By charging higher interest rates, microfinance businesses argue that they can cover their costs and use the profits to serve larger segments of the population than what would have otherwise been possible. The rapid proliferation of for-profit microfinance is a testament to this. There is definitely a previously unmet demand of people willing to pay a lot for credit. This is not to say that the industry shouldn't be properly regulated to prevent exploitation, or that costs cannot and should not be brought down through such things as more efficient administration and business model innovation, perhaps spurred by a healthy level of competition among providers.

*High cost coming from the very large amount of tiny transactions, and in some cases a high rate of default where there is no collateral.
If we are willing to concede the economic point, that the charging of interest within a just regulatory framework can be economically productive, does that make it good in principle? Is there a better option out there? Interestingly enough, in the tablet of Ishraqat, Baha'u'llah explicity lifts the ban on usury formerly instituted in Islam.
*note - I had originally posted a shortened version of this quote that I had found on a Baha'i economics compilation website. A reader pointed out that it wasn't the full quote, and so it didn't provide enough context. I have since reposted the full quote.

As to thy question concerning interest and profit on gold and silver: Some years ago the following passage was revealed from the heaven of the All-Merciful in honour of the one who beareth the name of God, entitled Zaynu'l-Muqarrabin [1] -- upon him be the glory of the Most Glorious. He -- exalted be His Word -- saith: Many people stand in need of this. Because if there were no prospect for gaining interest, the affairs of men would suffer collapse or dislocation. One can seldom find a person who would manifest such consideration towards his fellow-man, his countryman or towards his own brother and would show such tender solicitude for him as to be well-disposed to grant him a loan on benevolent terms. [2] Therefore as a token of favour towards men We have prescribed that interest on money should be treated like other business transactions that are current amongst men. Thus, now that this lucid commandment hath descended from the heaven of the Will of God, it is lawful and proper to charge interest on money, that the people of the world may, in a spirit of amity and fellowship and with joy and gladness, devotedly engage themselves in magnifying the Name of Him Who is the Well-Beloved of all mankind. Verily He ordaineth according to His Own choosing. He hath now made interest on money lawful, even as He had made it unlawful in the past. Within His grasp He holdeth the kingdom of authority. He doeth and ordaineth. He is in truth the Ordainer, the All-Knowing.
[1 One of the early believers who is best known to the friends for his reliable transcriptions of the Tablets of Bahá'u'lláh. (See Memorials of the Faithful pp. 150-153.) ]
[2 Such loans as bear no interest and are repayable whenever the borrower pleases.]

Render thou thanks unto thy Lord, O Zaynu'l-Muqarrabin, for this manifest bounty.

Many ecclesiastics in Persia have, through innumerable designs and devices, been feeding on illicit gains obtained by usury. They have contrived ways to give its outward form a fair semblance of lawfulness. They make a plaything of the laws and ordinances of God, but they understand not.

However, this is a matter that should be practised with moderation and fairness. Our Pen of Glory hath, as a token of wisdom and for the convenience of the people, desisted from laying down its limit. Nevertheless We exhort the loved ones of God to observe justice and fairness, and to do that which would prompt the friends of God to evince tender mercy and compassion towards each other. He is in truth the Counsellor, the Compassionate, the All-Bountiful. God grant that all men may be graciously aided to observe that which the Tongue of the One true God hath uttered. And if they put into practice what We have set forth, God -- exalted be His glory -- will assuredly double their portion through the heaven of His bounty. Verily He is the Generous, the Forgiving, the Compassionate. Praise be unto God, the Most Exalted, the Most Great.

Nevertheless the conduct of these affairs hath been entrusted to the men of the House of Justice that they may enforce them according to the exigencies of the time and the dictates of wisdom.

Once again We exhort all believers to observe justice and fairness and to show forth love and contentment. They are indeed the people of Baha, the companions of the Crimson Ark. Upon them be the peace of God, the Lord of all Names, the Creator of the heavens." -Baha'u'llah - Tablet of Ishraqat. Tablets of Baha'u'llah, pg 133

I wonder what has changed in 1300 years that it was once under the "devils influence", destined to "incur hell", and is now "lawful and pure"  and instrumental to worship with "joy and fragrance, happiness and exultation"? I don't mean this flippantly, I am really interested to know if there are practical reasons for such an abrupt shift, similar to the lifting of the ban on eating pork.
I am personally relieved, as a Baha'i, that He has allowed usury for the practical benefits. But I am also glad that He goes on to advise moderation, justice, and equity, reminding us that it must be conducted in the spirit of mercy and compassion. This emphasis was definitely forgotten in the recent greed-fueled rise and collapse of the financial market.

It is also interesting that while "The Supreme Pen has withheld itself from laying down its limits, as a wisdom from his Presence and as a convenience for his servants", he has given the Universal House of Justice the authority to regulate it according to the "exigencies of the time".

So to come back to the original question: is usury good? It doesn't seem to be an intrinsic universal good, like love or charity, or an intrinsic universal bad, like murder or rape. Throughout history it has been useful AND destructive. It has been forbidden AND exalted by religion. I guess, like many other things, it is merely a means, the end of which depends on the spiritual state of those involved, and the context in which it is applied.