Wealth is praiseworthy if... 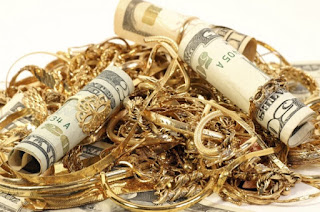 Maybe it is because I recently spent 3 months in a country with a GDP per capita of $2,100, or maybe because I recently entertained leaving a great job to spend more time with kids, or maybe because the pandemic is wiping out the economy, but I've been thinking about wealth lately.
The Baha'i Writings are full of references like this: "to be poor in all save God is a wondrous gift, belittle not the value thereof, for in the end it will make thee rich in God" (Baha'u'llah). Or, "In the estimation of them that have fixed their eyes upon the merciful Lord, the riches of the world and its trappings are worth as much as the eye of a dead body, nay even less" (The Bab).
There are also other references that praise wealth. These are not in conflict with the need to denounce riches, but require virtue in the acquisition and use of funds. Here are two examples.

The Bab, Selections from the Writings of the Bab

Gracious God! How can one see one’s fellow men hungry, destitute, and deprived, and yet live in peace and comfort in one’s splendid mansion? How can one see others in the greatest need and yet take delight in one’s fortune? That is why it has been decreed in the divine religions that the wealthy should offer up each year a portion of their wealth for the sustenance of the poor and the assistance of the needy. This is one of the foundations of the religion of God and is an injunction binding upon all. And since in this regard one is not outwardly compelled or obliged by the government, but rather aids the poor at the prompting of one’s own heart and in a spirit of joy and radiance, such a deed is most commendable, approved, and pleasing.

A letter of 2 April 2010 from the Universal House of Justice to the Baha'is of Iran spoke on wealth, social justice, and the family. They summarized this quote from `Abdu'l-Baha.

Wealth is praiseworthy in the highest degree, if it is acquired by an individual’s own efforts and the grace of God, in commerce, agriculture, art and industry, and if it be expended for philanthropic purposes. Above all, if a judicious and resourceful individual should initiate measures which would universally enrich the masses of the people, there could be no undertaking greater than this, and it would rank in the sight of God as the supreme achievement, for such a benefactor would supply the needs and insure the comfort and well-being of a great multitude. Wealth is most commendable, provided the entire population is wealthy. If, however, a few have inordinate riches while the rest are impoverished, and no fruit or benefit accrues from that wealth, then it is only a liability to its possessor. If, on the other hand, it is expended for the promotion of knowledge, the founding of elementary and other schools, the encouragement of art and industry, the training of orphans and the poor—in brief, if it is dedicated to the welfare of society—its possessor will stand out before God and man as the most excellent of all who live on earth and will be accounted as one of the people of paradise.

The conclusion of the letter from the Universal House of Justice discussed the state of materialism perpetuating "oppression and greed", and provides a vision of youth, mindful that "wealth is praiseworthy insofar as it is attained through just means and expended for benevolent purposes..."

Today the world is assailed by an array of destructive forces. Materialism, rooted in the West, has now spread to every corner of the planet, breeding, in the name of a strong global economy and human welfare, a culture of consumerism. It skilfully and ingeniously promotes a habit of consumption that seeks to satisfy the basest and most selfish desires, while encouraging the expenditure of wealth so as to prolong and exacerbate social conflict. How vain and foolish a worldview! And meanwhile, a rising tide of fundamentalism, bringing with it an exceedingly narrow understanding of religion and spirituality, continues to gather strength, threatening to engulf humanity in rigid dogmatism. In its most extreme form, it conditions the resolution of the problems of the world upon the occurrence of events derived from illogical and superstitious notions. It professes to uphold virtue yet, in practice, perpetuates oppression and greed. Among the deplorable results of the operation of such forces are a deepening confusion on the part of young people everywhere, a sense of hopelessness in the ranks of those who would drive progress, and the emergence of a myriad social maladies.
The key to resolving these social ills rests in the hands of a youthful generation convinced of the nobility of human beings; eagerly seeking a deeper understanding of the true purpose of existence; able to distinguish between divine religion and mere superstition; clear in the view of science and religion as two independent yet complementary systems of knowledge that propel human progress; conscious of and drawn to the beauty and power of unity in diversity; secure in the knowledge that real glory is to be found in service to one’s country and to the peoples of the world; and mindful that the acquisition of wealth is praiseworthy only insofar as it is attained through just means and expended for benevolent purposes, for the promotion of knowledge and toward the common good. Thus must our precious youth prepare themselves to shoulder the tremendous responsibilities that await them. And thus will they prove immune to the atmosphere of greed that surrounds them and press forward unwavering in the pursuit of their exalted goals.

The Universal House of Justice, 2 April 2010

I have a few more thoughts to add to the jumble of ideas so far. Happiness in many societies peaks when a family is making median income up to twice median income. Lower or higher than that range and happiness tends to fall off. I have reflected on that for many years. Being rich often means living in isolation from the masses of people, and social isolation leads to depression. Being rich also means that people see you as a class that they can't truly associate with. There is a comradery to being poor and everyone sacrificing. I have been friends with people who make 1% of my income, and the only way for true unity to exist is when people freely acknowledge the differences in wealth while the wealthy also spend generously on the poor.
I heard a story recently. If a man in an expensive suit were to pass by a pond where a child was drowning, should he sacrifice the suit to save the child? Of course he should. But that happens every day, separated by continents. If that man were to pre-emptively sacrifice that suit, he could send $1,000 to stop the spread of malaria and easily save a life. Or that $1,000 could go to feed and educate the poor of Honduras, or to strengthen government institutions, or to provide the spiritual education that will help propel a prosperous society. But when the poor are not in front of your face drowning in a pond, it is easy to forget about their suffering. When faced with the reality of the enormous gap in extremes of wealth and poverty, some people are clearly motivated to use their wealth to benefit others, while some people merely choose to avoid noticing the poor, and their wealth will become a liability.
Posted by Bryan
Email ThisBlogThis!Share to TwitterShare to FacebookShare to Pinterest