Mourning of an Intellectual 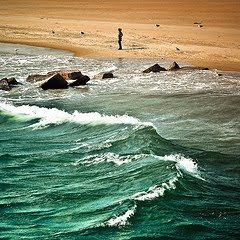 My grandmother passed away last week. Since then, I have been home to pay my last respects and to support my family. Being with friends and family has helped me appreciate the interdependency of our world. Every life is caught up in another. Living is sharing; Living is sharing joys and sorrows, meals, possessions, conversations, a community. All are interconnected. And when one life ends those who remain must reconfigure themselves and their world in light of that absence. The challenge of another's death is to summon up one's own creative power for life; to renew oneself and renew one's world in light of changed conditions.

In the coming weeks and months, my life will not require a great deal of change. This challenge will rest primarily on my mother and her siblings, my father, and of course my grandfather. The transformation towards which I feel compelled is more general. It is the mourning of an intellectual. The events of the past week have inspired a line of philosophical questioning on our society's approach to living and dying. But I cannot address it on my own; For it concerns our shared existence. It is a question to be addressed through collective struggle, not through the daydreams of one person. For this reason, my primary aim is to pose a question to those involved in spiritual and social transformation. My aspiration is to indicate its importance and clarify its meaning, in hope that the way forward might be worked out in action.

It seems to me that economic progress, as it is currently concevived, is measured by its ability to help an individual flee from the thought of her own death. My question (and you can see why this could only be worked out in action) is what might economic development look like that doesn't enable this flight from mortality, that perhaps might even stimulate reflection upon one's real conditions of life?

A few words of clarification would be helpful, I'm sure.

to Become What One Does

Awareness of an individual's mortality is closely linked to her use of things to perform daily tasks. In many ways, we become the things we do. When driving a car, I am not aware of myself, the steering wheel, or the brakes. I am driving. My knowledge of them is my use of them. I know the brakes because when I step on the brake pedal and I feel the car slow down. But I am not aware of them, in their being. My awareness of them is limited to my awareness of the task in which they're involved, which is driving. The same is true of myself. I am aware of my body in the performance of a task, but not as a being capable of death. That is not included in the task of driving. The same is true with nearly everything a person does in life, cooking, studying, chatting, building, etc. The individual is constantly immersed in the tasks of life. She becomes what she does. While all the while, she can never be what she does.

Once after receiving a head injury, I thought afterwards about the fact that my tumble could have killed me. I thought of all the things in which I was involved but would never be able to complete. I thought of projects in which I wished to participate but would have gone on without me. I was reminded my own life span does not coincide with the life span of the things in which I immerse myself. I was reminded I am not my involvements in the world around me. These were things I understood at some level. But, for the first time, these thoughts shot to the core of my being and awakened in me a sense of the body's fundamental frailty.

Involvements in the world, by their nature, assume that the doer will be alive to perform them. It is in the nature of an oil change that the person performing it lives to tell the tale. This is why a person forgets her own mortality when she becomes the things she does. She mistakes herself for her own projects and forgets her own being. She forgets the frailty of the physical frame. Death becomes something that will happen one day but not soon. She forgets that death is a possibility we carry with us from the moment we are conceived. Very rarely do we face immediate threats to our lives. But at no time are we ever immortal.

Death and the Economy of Convenience

A friend once asked how a particular car felt to drive. The brakes were in questionable condition. And we needed to make a decision about when to replace them. I replied half sarcastically half honestly, mimicing the quotations on life and death from unit three of Ruhi book one, that the brakes reminded me true life does not end in this world but continues eternally in other worlds of God. Suffice to say, I was communicating that driving the car was dangerous and the brakes needed to be replaced soon. The guiding assumption was of course that well-functioning equipment should not summon thoughts of one's own death. Equipment should function so well that it isn't noticed. It should allow the user to focus on the task at hand, which in this case is driving, not thoughts of one's own death.

Modern economic development has brought ever more sophisticated, ever more streamlined equipment. Telephones, airplanes, washing machines, and computers allow individuals to be ever more productive. Its watchword is convenience. As more tasks become mechanized and automated, more attention can be paid to new tasks. The global economy is geared around the promise to allow users to do more, more, more of whatever they do. It is geared towards immersing its users deeper and deeper in their involvements with the world.

The dilemna of technological advancement is that a streamlined society is one in which an individual can coast along immersed in her own projects, until one day the possibility of her own death becomes unavoidable: a heart attack, a car accident, a failed kidney. Perhaps, she is prepared. Perhaps, she is not. But the economy is based around streamlining one's involvement with the world. That is wonderful, a marvel of our age. But death is the impossibility of doing anything in this world. In death the promise of more, more, more is interrupted by the reality of nothing, nothing at all.

It seems to me that fleeing from the thought of death is woven into the fabric of modern economic development. What if it wasn't? What would that look like? How can we integrate the twin aims of developing ever more effective equipment and of stimulating reflection upon one's real conditions of life?

There is a great deal more to these questions than has been discussed here. But, at the very least, the question has been posed. And its significance has begun to be clarified.
Posted by Mr. Cat
Email ThisBlogThis!Share to TwitterShare to FacebookShare to Pinterest