A revolution in cars

Despite the current chaos and social isolation amid the coronavirus, there are things to look forward to. In about 10 years a majority of people in Europe and America will be buying electric cars, and it will have an enormous positive effect on the economy, the environment, and your health.


First a brief refresher on the electric motor. If you move coils of wire over a magnet, an electric current will be pushed through the wire. This is how dams, wind turbines, coal and nuclear plants generate most of your electricity. If you take the same magnet and wires and run a current through the wires, it will push on the magnet and make it move. This is how all your electric drills make the bit spin.

Now if you compare the efficiency of an electric motor against a gas engine, the gas engine doesn't look very good. It pushes using tiny controlled explosions and generates a lot of heat, so from the pure raw energy of gasoline it only puts 19% into motion, whereas an electric motor puts about 77% of the raw energy into moving the car. Part of that efficiency (17 percentage points) comes from regenerative breaking, the fact that any time the car is slowing down that motor is working in reverse and recovering energy back into the battery, like a generator. Gliding downhill for several miles will recharge an electric vehicle. On a gas car that breaking energy is wasted as heat.

So on purely efficiency grounds, electric motors are completely better than gas engines. Electric cars are also much more fun to drive thanks to the incredible torque, quiet driving, and smooth acceleration without a gear box. To top it off, with an electric motor you can say goodbye to the smell of car exhaust and all the health problems that go with it.

But gas cars still have one major advantage because their fuel is incredibly dense and can be poured into the vehicle in under 2 minutes. Here's what I've learned about charging infrastructure.

In November 2018 I bought a Pacifica plug-in hybrid. When it is fully charged it gets 32 miles of all-electric range then it goes to a hybrid mode that increases the efficiency of the gas engine because it still recovers breaking energy like any hybrid. The vehicle comes with a level 1 charger, which can be plugged in to any home outlet and fully charges in about 10 hours, so pretty much every morning you step into a fully charged vehicle. Obviously it helps to have a garage for this, but they also work fine using outdoor outlets. 32 miles just about covers my commute, so if all I do is go to work and back, I don't use any gasoline.

I also learned that there is a level 2 charger that fully charges in about 2 hours. I downloaded the PlugShare app that shows where these chargers are available, some for free. For example, near me there is a McDonald's, New Seasons, and Cafe Yumm that have free chargers, so I usually choose them over others to get the free juice. Many more chargers are around for a cost. 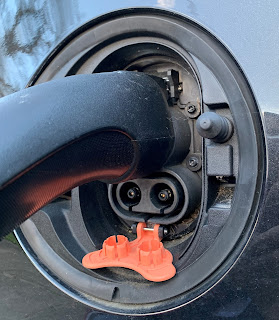 The really exciting part about EVs is the money. At least for now they tend to cost more than an equivalent gas car when buying new, but their operating cost is significantly lower. To compare running costs, convert the vehicle's mpg and the price of gas to dollars per mile. Then do similar math with the cost of electricity and you will get dollars per mile of electric driving. Using $3/gal for gas and $0.135/kWh for electricity, a 2018 Pacifica running on gas costs $0.14/mile, and the same car running on electricity costs $0.07/mile. That's right, half as much to run on electricity when I'm charging at home every night. This will actually improve as utilities move to time-of-day rates and charge less for electricity at night, or as gasoline prices go up.

With some experience behind me, my other car bit the dust and I replaced it with a used Spark all-electric that costs only $0.03/mile and gets about 80 miles of range, so it's like driving a car with a 3-gallon tank that is magically full every morning. In addition to the other chargers it can use a fast DC charger that fills it up in about 20 minutes. Those chargers are less common but once you know where they are, it's pretty easy to plan trips. While the level 1 and 2 AC chargers work on any electric vehicle, there are three types of fast chargers for electric cars in North America: Tesla's superchargers, Nissan's CHAdeMO, and the CCS used by everybody else.

With even more experience behind me, my mother's car bit the dust and I replaced it with a used Chevy Volt PHEV that gets 40 miles of all-electric range before going to hybrid mode.

Eventually I had an electrician install a 240 V plug in my garage (the kind used on dryers) and I bought a level 2 charger to use at home, which is very handy when making multiple trips in a day.

Jumping to all-electric seems scary so I imagine most people will want PHEVs for the coming years to gain most of the advantages of electric motors without having to abandon the benefits of using gas when needed. But there are huge benefits to going all-electric. A hybrid vehicle needs two engines and still has all the complexity and maintenance that comes with a gas car. Once you can throw that gasoline engine in the garbage you get less weight, more room, and virtually no maintenance. A lot can go wrong in a gas engine. Electric motors are simple, mostly frictionless, don't need oil changes, and generally don't break. The break pads on electric cars last as long as the car, so you'll just need to buy new tires every once in awhile and that's it. When electric vehicles go into mass production, and throw in some new battery technology, they'll be cheaper than gas cars at the dealer, they'll be cheaper to operate, and cheaper to maintain. The initial rumors of needing to replace battery packs every 10 years have proven to be overblown. Most likely battery packs will lose capacity over time but last as long as a typical gas engine.

The new battery tech is called solid-state. It's already a proven technology and all the big car manufacturers are trying to figure out how best to get it into production vehicles, which will appear around 2025. Basically, by replacing the liquid electrolyte (the part separating the anode and the... never mind you don't care) with a solid, the batteries will be more dense, more safe, more cheaper, and more better. Pretty soon battery packs for EVs will have double the range for the same size and weight, and cost less. When that happens, very few people will be wanting gas cars.

The production for EVs is ramping up. GM, Volkwagen, and BMW have all been putting a ton of money into electrification and the fruits of their efforts won't appear for another year or two. By 2023 there will be an estimated 70 all-electric models available around the world and their prices will drop. Of course, Tesla is about 8 years ahead of everybody and will continue to dominate, but they will be like the Apple iPhone and GM will be the Samsung Galaxy. I can pretty much guarantee that one of the big car manufacturers will be bankrupt by 2028 from botching the transition, and by 2030 the majority of new cars will be all-electric or plug in hybrids.