Thoughts on a pandemic

My impression is that a majority of people view the first scenario as realistic and see anyone proposing the second as okay with mass murder.

The evidence supports the second scenario, and it's not nearly as scary as everyone first assumed. The virus is already endemic, as of today the world has 1 million confirmed cases touching almost every country, but the real infection rate is probably many times that number because half of those infected barely notice they have it. In places like the United States where testing for the virus was initially very low, the actual infection rate is at least 4 times the number of confirmed cases.


That the virus is highly contagious is both good and bad. Bad because many people will get hit with the virus at the same time, causing hospitals to be overloaded and ration care. Good because viruses that are highly infectious more easily burn themselves out and run out of victims.

Early estimates of the COVID-19 fatality rate caused panic, but as more data came in it became clear that less than 1% of those infected ended up dying when they had functioning hospitals. The confirmed cases are always fewer than all cases of infection, but the people dying from the disease are almost always tested. That creates a bias towards overestimating the fatality rate. Dividing by a larger number (actual infections) means the fatality rate will go down as more data accumulates. In Oregon, 3 weeks into isolation, you can't even get tested unless your symptoms are severe, and even then you have to pay for the test yourself. South Korea had an early outbreak but they managed it with the most extensive testing at the time, and their fatality rate was about 0.6% of those infected. The UK now estimates it is between 0.5 and 1.0%. Of course, areas that see health care rationing will see a higher number. 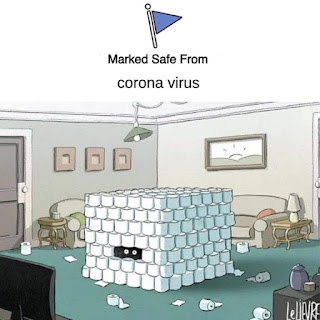 A virus that is only 5-6 times more fatal than the seasonal flu doesn't sound that bad, but it is hitting the world all at once, and unlike the flu there is no vaccine. The flu has killed up to 80,000 people in the United States in a year without a panic, but it is spread out over the entire flu season and those vulnerable to the flu can get a vaccination that reduces its severity and spread.

From an epidiomological point of view the new coronavirus is not that bad, it's not a bird flu with a 60% mortality, and it largely doesn't affect children. That said, it is much worse than the flu, does not have a vaccine, and its initial spread can easily overload hospital capacity in an area. That means there is an urgent need to slow it down with a period of isolation, but then what? The current social distancing is not going to eliminate the virus. If every person on earth were 100% isolated in their homes for 3 weeks, the virus would likely disappear, but that is not possible. Hospitals, police, utilities, and food distribution all need to continue. Isolation would reduce the cases of the virus, which could then be managed with testing and case tracking, but that is unrealisticly optimistic when faced with the current reality.

The world is slowly coming around to the idea that the virus is endemic and can't be eliminated, and that means accepting that about half of the world will get the virus, depending on when and if a vaccine becomes available. It may not even be eliminated with a vaccine; it may just join the list of endemic cold and flu viruses that make their rounds in the world's population. The treatment of the disease will assuredly improve with time (there are already some promising candidate drugs), but assuming there is not a fundamental change, there are several important implications of a novel coronavirus that is endemic and not going away anytime soon.

One implication is that governments will increasingly start evaluating the value of isolation from the virus against the economic and social costs. That doesn't mean that people should die to support the stock market, it means that the 10 million people who just lost their jobs in the USA are a casualty of the war and their sacrifices should not be squandered. Most people would accept missing a few paychecks if it meant eliminating the virus, but what if that sacrifice didn't make a difference? If an area isolates and reduces its economic activity before the virus appears, it's just as susceptible after the release of quarantine, with nothing gained. A much more reasonable approach would be to initially put a lot of effort into testing, and increase restrictions in proportion to the spread of the virus, especially while considering hospital capacity and admissions. Tight isolation when hospital admissions are ramping up, and loose isolation when health care professionals are sitting around with spare capacity. Each state and major metropolitan area can vary their level and length of isolation based on those needs, moving back and forth on the scale over the next year. Antibody tests could monitor who has immunity, and at a certain point society would just go back to "normal".

That sounds a bit grim, it means hundreds of thousands - up to millions will die, but it is reality. The alternative is a failed attempt to eliminate the virus that will cause incredible economic suffering. Governments around the world will be evaluating the cost of lives and the costs to the economy, and as uncomfortable as it sounds, there is a limit to the value of a human life. Those decisions over the next few months will test the morality of nations and create a strong push towards a unified global order to respond with collective action to common threats.

One little invisible germ caused all this.
Posted by Bryan
Email ThisBlogThis!Share to TwitterShare to FacebookShare to Pinterest