Universal House of Justice on the Pandemic

On 9 May 2020, the Universal House of Justice wrote a letter to all Baha'i National Spiritual Assemblies on applying the current global plan to the new situation of a pandemic and some thoughts on what is to come. Or as they put it, "The world is caught in the grip of a fast-spreading virus that has claimed many thousands of lives and severely disrupted a large share of humanity’s social and economic activity... we wish to explore more fully what the coming year might entail."

The House of Justice has released multi-year plans to direct the worldwide Baha'i community and focus on certain incremental goals. In 2001 they launched into a series of four 5-year plans that would culminate in 2021, which will be the centennial anniversary of Abdu'l-Baha's passing. The importance of this transitional year has been talked about among Baha'is for over a decade, so it's not totally surprising that a once-in-a-century pandemic is taunting the world and the next 12 months are ominously uncertain.

In an earlier letter of 18 January 2019, exactly 100 years after the opening of the Paris Peace Conference that ended WWI, the House of Justice wrote that three major steps were taken in the preceding century toward world order: the formation of the League of Nations following WWI, the formation of the United Nations after WWII, and a decade of international cooperation and agreements that followed the end of the Cold War, culminating in the Millennial Summit. The deficiencies in each of these advancements led to the instability that became the impetus toward another, greater push towards world order. Though the last decade of the 20th century saw a major improvement in world peace, throughout the 21st century the trend has been away from world order. According to the letter, "the dominant currents in societies everywhere are pushing people apart", "political and economic systems have enabled the enrichment of small coteries with grossly exorbitant wealth--a condition that fuels fundamental instability", "religious fundamentalism is warping the character of communities, even nations", "a decline in public trust... systematically exploited by vested interests seeking to undermine the credibility of all sources of knowledge", "certain shared ethical principles... are eroded", and "the will to engage in international collective action.... has been cowed, assailed by resurgent forces of racism, nationalism, and factionalism."

The forces of disorder and disintegration have been gaining ground, and world unity will certainly worsen, "possibly with catastrophic consequences" according to the 2019 letter. Every major push toward world unity has been preceded by some dramatic and destructive changes that push people toward the inevitable world federal system Baha'u'llah envisioned. The current movement away from world order will continue, according to the House of Justice, "until a chastened humanity sees fit to take another significant step, perhaps this time decisive, towards enduring peace." 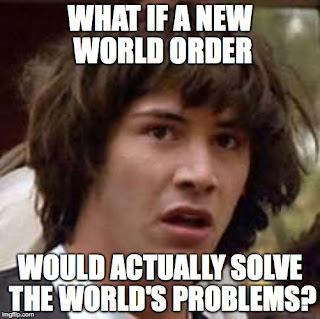 What significant changes might be ahead? In 2010 I wrote The End of War about the Lesser Peace, a period prophesied by Baha'u'llah that was largely, but not entirely, achieved by the end of the 20th century. Noting that the existing world order was fraying at the edges and could unravel catastrophically, in 2016 I wrote The End of Nuclear Weapons and a New World Order, mentioning that the elimination of nuclear weapons and the end of veto power at the UN Security Council are the two main changes needed to move to the next stage of world order, and several peripheral ones. I can't imagine those changes taking place without a dramatic collapse of existing systems, or some other powerful demonstration that everyone is better served by unity, not nationalism. Is the pandemic the thing that will drive the United States into joining the International Criminal Court and relinquishing veto power at the Security Council? I don't think so, but I can see the pandemic as accelerating the existing trends and creating the stresses that lead to significant social unrest.
Back to the 2020 letter, the House of Justice noted that,

It is not possible to foresee the extent to which this pandemic will influence the movement towards unity among the nations. But there is no doubt whatsoever that, for the endeavours of the Bahá’í community, the months ahead will be consequential. Indeed, it could hardly be otherwise. This final year, of the final Plan, in a series spanning the final quarter of the opening century of the Formative Age, will seal the foundation upon which will rest the next series of global undertakings. It is the concluding act in a captivating drama whose end is yet unwritten.

Besides this larger context of the drama of establishing world peace, the letter also surveyed the current plan that Baha'is are working under and gave significant advice on how Baha'i institutions around the world can best navigate. The letter shared the striking news that in the first four years of the current plan, the Baha'is worldwide have "doubled both the number of core activities occurring worldwide and the number of their participants", a significant sign of progress. They also mentioned that many communities have, "taken great strides in adapting to this new reality", that the crisis is not "a hiatus to be endured with patience", that "the need to render meaningful service to humanity [is] more urgent", that applying the current Plan's framework for action should "continue in earnest", and that the current crisis "will have a direct impact on Bahá’í activities... for months or even years, and the task of adapting to the situation cannot be postponed."
Adapting and continuing a set of activities that are inherently social and educational will not be easy. Video meetings and remote education is not a comparable replacement for in-person exchanges. Personally, many meetings, including children's classes, have continued over video conferencing. I have started meeting with local friends while maintaining distance, and I think small groups can continue meeting locally as long as certain conditions are met, such as groups under 10 people, testing, and avoiding travel to other areas. Along these lines, the letter also notes,

However, while certain possibilities have been temporarily closed, others have opened up, and new means have emerged for strengthening existing patterns of activity. Flexibility has proven to be an asset, but so has vigilance in ensuring that the primarily local character of community activities is not diluted; efforts to nurture flourishing communities within neighbourhoods and villages and across clusters must continue.

On the functioning of Baha'i institutions, the House of Justice also says that they must "maintain their operations throughout this period", and if lack of funds becomes an issue, then "the whole company of the faithful in each country will rally around you, and in particular, we are confident that believers with means will come forward to aid you." Local Spiritual Assemblies, they say, "should consider what means might be within their power to prevent, relieve, or mitigate suffering in the wider society of which they are an integral part."
I really enjoyed this letter. In part because it was a good reminder that the pandemic is truly global. I can't think of another example when a calamity hit so evenly across the entire world, except an older pandemic. From villages of Nigeria, to Pakistan, Russia, Germany, or Brazil, governments and peoples are facing similar health, social, and economic upheavals. Not only that, but it is more apparent than normal that everyone's fate is tied together. The virus taking hold anywhere on earth threatens everyone. The economic woes of China, the UK, or India all affect each other. Selfishness, especially at the national level, is self-defeating. Attempts to bring supply chains into the United States to reverse globalisation will result in an even more woeful economy and merely further emphasize the need for international cooperation. One way or another, we are entering the last phase of a long drama that will mark the end of the age of nationalism. Good riddance.