"A Grand Bargain Over Evolution" 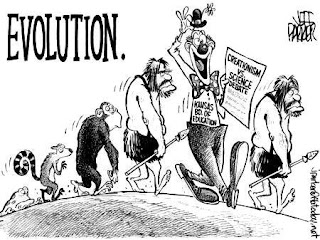 Following on his book "The Evolution of God", which I have reviewed here, Robert Wright tries to reconcile science and religion. Wright's reconciliation seems to be approaching the Baha'i belief in their essential harmony; he is just coming from the other direction. That is, from the vantage of a devoted materialist.

There were two passages that I found especially interesting. In the first one he suggests that evolution, given long enough, was destined to produce some kind of species with roughly our level of intelligence and moral capacity.

"For starters, there are plenty of evolutionary biologists who believe that evolution, given long enough, was likely to create a smart, articulate species — not our species, complete with five fingers, armpits and all the rest — but some social species with roughly our level of intelligence and linguistic complexity. And what about the chances of a species with a moral sense? Well, a moral sense seems to emerge when you take a smart, articulate species and throw in reciprocal altruism. And evolution has proved creative enough to harness the logic of reciprocal altruism again and again..."

Moreover, if moral capacity inevitably evolves in tandem with intelligence, then it must be treated as a universal truth, not unlike mathematical truths, which exist independent of the species becoming aware of them.

"Mr. Pinker has noted how the interplay of evolved intuition and the dynamics of discourse tends to forge agreement on something like the golden rule — that you should treat people as you expect to be treated. He compares this natural apprehension of a moral principle to the depth perception humans have thanks to the evolution of stereo vision. Not all species (not even all two-eyed species) have stereo vision, Mr. Pinker says, but any species that has it is picking up on 'real facts about the universe' that were true even before that species evolved — namely, the three-dimensional nature of reality and laws of optics.

Similarly, certain intuitions about reciprocal moral obligation are picking up on real facts about the logic of discourse and about generic social dynamics — on principles that were true even before humans came along and illustrated them. Including, in particular, the non-zero-sum dynamics that are part of our universe.
As Mr. Pinker once put it in conversation with me: 'There may be a sense in which some moral statements aren’t just ... artifacts of a particular brain wiring but are part of the reality of the universe, even if you can’t touch them and weigh them.' Comparing these moral truths to mathematical truths, he said that perhaps 'they’re really true independent of our existence. I mean, they’re out there and in some sense — it’s very difficult to grasp — but we discover them, we don’t hallucinate them.'"

The second passage that I found interesting concerns the question of higher purpose. Even if moral capacity is a universal truth that will manifest through evolution given enough time and opportunity, does this imply higher purpose? Is the human process of uncovering universal truths meaningful in the grand scheme of things? To this question, Wright uses a popular analogy used in Baha'i thought. While individual organs have limited functionality, they do serve the higher purpose of the organism to which they belong. Likewise, as humans evolve culturally, socially, and morally, is it a stretch to imagine that they too are evolving to better serve a higher order creative process? Call it a "meta-natural selection" on a universal scale.

"As Mr. Dawkins pointed out, we can now explain the origin of organisms without positing a god. Yet Mr. Dawkins also conceded something to Paley that gets too little attention: The complex functionality of an organism does demand a special kind of explanation.

And, actually, even once you accept that natural selection, not God, is the 'designer' — the blind watchmaker, as Mr. Dawkins put it — there is a sense in which these organs do have purposes, purposes that serve the organism’s larger purpose of surviving and spreading its genes. As Daniel Dennett, the Darwinian (and atheist) philosopher, has put it, an organism’s evolutionarily infused purpose is 'as real as purpose could ever be.'
SO in a sense Paley was right not just in saying that organisms must come from a different creative process than rocks but also in saying that this creative process imparts a purpose (however mundane) to organisms.

There are two morals to the story. One is that it is indeed legitimate, and not at all unscientific, to do what Paley did: inspect a physical system for evidence that it was given some purpose by some higher-order creative process. If scientifically minded theologians want to apply that inspection to the entire system of evolution, they’re free to do so."

Wright is careful to acknowledge that this wouldn't be proof of an existence of a god, but it does definitely open up the possibility of higher spiritual truth.

"The second moral of the story is that, even if evolution does have a 'purpose,' imparted by some higher-order creative process, that doesn’t mean there’s anything mystical or immaterial going on. And it doesn’t mean there’s a god. For all we know, there’s some 'meta-natural-selection' process — playing out over eons and perhaps over multiple universes — that spawned the algorithm of natural selection, somewhat as natural selection spawned the algorithm contained in genomes.

At the same time, theologians can be excused for positing design of a more intentional sort. After all, they can define their physical system — the system they’re inspecting for evidence of purpose — as broadly as they like. They can include not just the biological evolution that gave us an intelligent species but also the subsequent 'cultural evolution' — the evolution of ideas — that this species launched (and that, probably, any comparably intelligent species would launch).

When you define the system this broadly, it takes on a more spiritually suggestive cast. The technological part of cultural evolution has relentlessly expanded social organization, leading us from isolated hunter-gatherer villages all the way to the brink of a truly global society. And the continuing cohesion of this social system (also known as world peace) may depend on people everywhere using their moral equipment with growing wisdom — critically reflecting on their moral intuitions, and on the way they’re naturally deployed, and refining that deployment."

This last paragraph is cool; he suggests that there is room at this stage for some advanced, universalistic theology, one that promotes unity on a global scale. A theology not unlike the one contained within the Baha'i Faith.

"Clearly, this evolutionary narrative could fit into a theology with some classic elements: a divinely imparted purpose that involves a struggle toward the good, a struggle that even leads to a kind of climax of history. Such a theology could actually abet the good, increase the chances of a happy ending. A more evolved religion could do what religion has often done in the past: use an awe-inspiring story to foster social cohesion — except this time on a global scale."