Socrates and the Baha'i Faith: Parallel Thinking on the Nature of Leadership 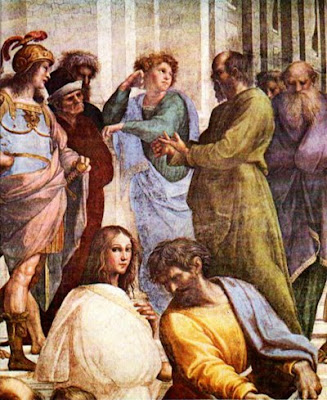 Approximately 2500 years ago, Socrates, according to Plato in "The Republic", broke into a conversation with a fellow named Thrasymachus over the qualities of a ruler and the nature of justice. Thrasymachus's basic argument was that justice was a relative concept, defined by the interest of the stronger party. Power and happiness could best be obtained by the unjust, who could then define justice according to their choosing:

"...But when a man not only seizes the property of his fellow-citizens but captures and enslaves their persons also, instead of those dishonorable titles he is called happy and highly favored, not only by the men of his own city, but also by all others who hear of the comprehensive injustice which he has wrought. For when people abuse injustice, they do so because they are afraid, not of committing it but of suffering it. Thus it is , Socrates, that injustice, realized on an adequate scale, is a stronger, a freer, and a more lorldy thing than justice; and as I said in the beginning, justice is the interest of the stronger; injustice, a thing profitable and advantageous to oneself"

Through the characteristic Socratic method that we know and love, Socrates went on to systematically dismantle the argument through a barrage of relentless questioning. In the process he defined justice as a requisite quality of leadership, and a just leader as one who does not crave leadership, but who accepts it reluctantly out of necessity. In other words a just leader accepts some responsibility for the affairs of others in the capacity of servitude:

"Now the heaviest of all penalties is to be ruled by a worse man, in case of one's own refusal to rule; and it is the fear of this, I believe, which induces virtuous men to take the posts of regime and when they do so, they enter upon their rulership, not with any idea of coming into a good thing, but as an unavoidable necessity, not expecting to enjoy themselves in it, but because they cannot find any person better or no worse than themselves, to whom they can commit. For the probability is, that if there were a city composed of none but good men, it would be an object of competition to avoid the possession of power, just as now it is to obtain it; and then it would become clearly evident that it is not the nature of the genuine ruler to look to his own interest, but to that of the subject- so that every judicious man would choose to be the recipient of benefits, rather than to have the trouble of conferring them upon others."

Clearly, his account of leadership is visionary, even by today's standards. The electoral process in the United States is set up as a campaign style election, which favors those with the most money and well crafted, poll-tested message. Leadership is a thing to aspire for, requiring careful planning and relentless self-promotion.

The definition and process of electing a leader in the Baha'i community is completely different; it actualizes much of Socrates's vision of leadership. This is not surprising, he was the favorite philosopher of Baha'u'llah. In the "Tablet of Wisdom" he writes:

"After him came Socrates who was indeed, wise, accomplished and righteous. He practised self-denial, repressed his appetites for selfish desires and turned away from material pleasures. He withdrew to the mountains where he dwelt in a cave. He dissuaded men from worshipping idols and taught them the way of God, the Lord of Mercy, until the ignorant rose up against him. They arrested him and put him to death in prison. Thus relateth to thee this swift-moving Pen. What a penetrating vision into philosophy this eminent man had! He is the most distinguished of all philosophers and was highly versed in wisdom. We testify that he is one of the heroes in this field and an outstanding champion dedicated unto it. He had a profound knowledge of such sciences as were current amongst men as well as of those which were veiled from their minds. Methinks he drank one draught when the Most Great Ocean overflowed with gleaming and life-giving waters. He it is who perceived a unique, a tempered, and a pervasive nature in things, bearing the closest likeness to the human spirit, and he discovered this nature to be distinct from the substance of things in their refined form. He hath a special pronouncement on this weighty theme. Wert thou to ask from the worldly wise of this generation about this exposition, thou wouldst witness their incapacity to grasp it. Verily, thy Lord speaketh the truth but most people comprehend not."

Abdu'l Baha, the center of the "Covenant" and the preeminent figure in Baha'i history who isn't considered a "manifestation" of God, thought of himself primarily as a servant of God and humanity. In a letter to Baha’is in the United States, he wrote,

Following on his grandfathers example, Shoghi Effendi, the "Guardian" of the Baha'i Faith, outlined the system of Baha'i elections that explicitly elect individuals who have the greatest capacity to serve. The transparency of an individual’s desire for power often precludes them from consideration. In a letter to a local spiritual assembly, he wrote

"I feel that reference to personalities before the election would give rise to misunderstanding and differences. What the friends should do is to get thoroughly acquainted with one another, to exchange views, to mix freely and discuss among themselves the requirements and qualifications for such a membership without reference or application, however indirect, to particular individuals. We should refrain from influencing the opinion of others, of canvassing for any particular individual."

Assembly members, when elected, hold no individual power and receive no individual glory. Through the rules of consultation, nicely outlined here by Farzin Aghdasy, assemblies guide community life. The attitude is one of servitude and responsibility, which are not usually associated with positions of power.