Uncovering Nobility in a Fallen World 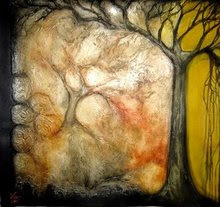 *This post was co-written with Brenden Rogers*
A while back I wrote about the Christian idea of "original sin" and reinterpreted it from a Baha'i point of view, Adam symbolizing the physical self, and Christ symbolizing the spiritual self. In the post I outlined the Baha'i's view of people as inherently noble. Baha'u'llah exhorts us in "Gleanings" to "Regard man as a mine rich in gems of inestimable value".
Inherent nobility is definitely not a new idea, even if it has fallen out of favor with Christianity. It can be argued however, that the recognition of Christ as Savior presupposes a human capacity to recognize the truth. To recognize something is to remember...
Plato wrote extensively about inherent nobility. In chapter 7 of Plato's "Republic", Plato depicts a fictional conversation between Socrates and Glaucon about the nature of education in search of the idealized form of "the good". He uses the now famous "allegory of the cave", where he asks Glaucon to imagine a number of individuals shackled since childhood in an underground cave so that they can only look in the direction that they are sitting. Above and behind them there is a bright fire burning, and in between there are other people carrying statues and images which are reflected onto the wall in front of the prisoners. At a certain point one of the individuals is compelled to break free and is dragged up out of the cave and into the light. If told that the images he had been watching were mere shadows of reality, and that the things towards the light are more true, he would be confused and stubbornly insist that the old images more real. Then as his eyes adapted to the light, and he became accustomed to the world above, he would eventually recognize that his vision had actually been increased, a whole new world had been revealed. If he were then to go back down into the cave and rescue his friends, they would laugh him to scorn and mock his poor vision in the dark.
Plato uses this analogy to argue for the existence of a soul in each individual which, if oriented properly, is naturally drawn towards true reality. He describes this reality as the "good", the search for which can become lost in the lower states of ignorance and delusion.
"Whereas, our present argument shows us that there is a faculty residing in the soul of each person, and an instrument enabling each of us to learn; and that, just as we might suppose it to be impossible to turn the eye round from darkness to light without turning the whole body, so must this faculty, or this instrument, be wheeled round, in company with the entire soul, from the perishing world, until it be enabled to endure the contemplation of the real world and the brightest part thereof, which, according to us is the ideas of the good...
Hence, I continued, there should be an art of this turning around, involving the way that the change will most easily and most effectually be brought about. Its object will not be to produce in the person the power of seeing. On the contrary, it assumes that he possesses it, though he is turned in a wrong direction, and does not look towards the right quarter-and its aim is to remedy this defect."
I believe that a core human attribute is the ability to recognize truth when we see it. Often times our vision is veiled and we become content with the shadows on the wall. While it is possible to be shaken violently out of slumber, or dragged out of a cave kicking and screaming, most of us are best served by the gentle guidance of a mentor, teacher, or friend. Our system of education can and should play a role in this. The word education comes from the Latin root educare (ex + ducare), literally meaning to "bring out". Socrates and the classical philosophers held that education is not something one takes in, but rather something one uncovers and "brings out" of themselves. While no one can find the gems for anybody else, they can help them open their eyes to self discovery and ignite a passion for seeking out truth. In the second part of the aforementioned quote from "Gleanings, Baha'u'llah states that "Education can, alone, cause it to reveal its treasures, and enable mankind to benefit therefrom."
Baha'u'llah describes the search for truth in the "Seven Valleys"
"the traveler abideth in every land and dwelleth in every region. In every face, he seeketh the beauty of the Friend; in every country he looketh for the beloved. He joineth every company, and seeketh fellowship with every soul, that haply in some mind he may uncover the secret of the Friend, or in some face he may behold the beauty of the Loved One."
Posted by Jason
Email ThisBlogThis!Share to TwitterShare to FacebookShare to Pinterest