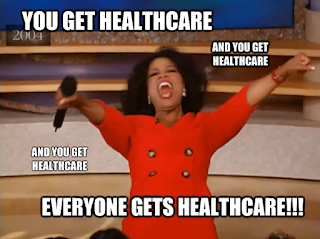 This week I listened to three members of the Oregon Health Authority talk about past and present reforms to Oregon's health system, and I also listened to the chair of Family Medicine at OHSU. Over the past few years I've been increasingly engrossed in the issues of health care reform, and here, tonight, live on the Internet, I'm going to lay out how to fix health care in the United States. That's right, the whole thing.

The reason we're talking about this is the high cost of the existing system. Medicare and Medicaid will literally bankrupt our country in 10 years if current trends continue. Before that happens though, the cost of an insurance premium will be equivalent to the average income.

Does more money equal better quality? Right now for every doctor there are 11 administrators that do not contribute to the health of patients. Most doctors have several people assigned to deal with insurance claims. As more people, intentionally or otherwise, go without health insurance, those paying premiums end up subsidizing them. This cycle makes insurance more expensive and increases the pool of uninsured, who without preventive care end up using much more expensive specialists while paying out of pocket. 62% of bankruptcies come from medical emergencies, and 78% of those were insured at the onset of the emergency. Insurance companies have an incentive to exclude the people who need insurance most, and deny payments when treatment is received. Not convinced yet? The overall quality of the US health care system was ranked 37th in the world by the World Health Organization. There is only one category that the US health systems ranks #1: cost per capita.

Attempts to reform the health system fall into three general categories. The first is to create an insurance mandate. Despite some obvious flaws about trying to force everyone to make a $10 thousand purchase annually (the average family premium), this is actually a good idea. The whole idea of insurance is to spread out risk. A major flaw in the current model is that anyone can receive health care, but not everyone puts into the insurance pool. If everyone had to contribute, and insurance companies were better regulated so that they could not deny unhealthy applicants, nor whimsically deny claims, then the risk would be more appropriately spread out.

The third general category is public hospitals, or socialized medicine. The VA hospitals are examples of public hospitals, except only for veterans. The doctors are salaried employees of the government, and provide the care at little or no cost to the patients.

Almost every industrialized nation of the world has publicly-funded health care, with a parallel private system. The main exception to that is the United States.

To those familiar with the issues, there is no debate about whether or not the US needs reform, and scare tactics about socialism seem childish. A system of publicly-funded hospitals providing primary care would be the most effective reform. The proposal being debated in Congress right now is about an insurance mandate, and if passed will not fundamentally change the system.

America practices socialism, and always has. Just as China remains communist in name, but capitalist in practice, the US remains capitalist in name, but shares public roads, schools, universities, military, electricity, and communications, while heavily regulating industry and labor rights. In practice, the US and China are almost exactly the same on the capitalist - socialist balance of society. The main difference between the two is political structure, which often gets confused with economic models. Bringing up the evils of socialism and government, a tactic so often used in the health care debate, is... well... ignorant.

The ultimate monopoly is to have a product that nobody can live without, literally. An unfortunate blending of capitalism and politics has given pharmaceutical companies incredible profits, which are then reinvested in politicians' campaign funds in exchange for favorable legislation. The industry spends more money on lobbying activities than any other industry. Thousands of people in Washington DC are employed by pharmaceutical companies to protect their interests politically. The money goes beyond politics into influencing hospitals, curriculum, and even paying doctors direct kick-backs in exchange for prescribing certain drugs over others. They also openly participate in price fixing to reduce competition among the industry, which is the most profitable of all businesses in the US. Out of the $643 billion spent globally on drugs each year, half of that is spent in the US, representing about 13% of its overall health care costs.

Why are drug companies supporting the current proposed reforms? It's the absence of pharmaceutical reform in the bill. Currently Medicare is expressly forbidden by Congress from using its enormous market share to negotiate for cheaper drugs. Currently the US does not allow drugs to be imported, even drugs from Canada. These laws are political favors that harm consumers.

But isn't the research and innovation of the US drug companies useful to the quality of the system? A great deal of research is actually provided by public universities, and studies sponsored by pharmaceutical companies are several times more likely to skew the results to the interests of the company, thus distorting the scientific process. The patents on drugs run out after 7 years, so if profits are to remain high, the company must create a new need, even when one doesn't exist. In short, they are disease-mongering. Pharmaceutical companies play an important role, but are grossly overcompensated.

Malpractice liability reform is often touted (especially by doctors) as a way to save rising health care costs. The cost of liability insurance represents somewhere between 5 and 10% of health care costs in the US. There is general agreement about the need for reform, but how to reform, and how much it will reduce costs is up in the air. One method is a tort cap, putting a limit on awards from damages, typically less than $1 million. Consumers need to be protected from negligence, but the cases must reflect common sense and an acknowledgement of inherent risk in medical procedures.

The current situation gives an incentive for doctors to over-utilize scans and tests to avoid being blamed for negligence. This creates inefficiency, resulting in more tests or services than may be required to address a particular condition effectively.

There are two incentives in the current system that need to be re-aligned: those of doctors and of patients. Doctors currently work from a fee-for-service perspective; they're paid more if they see more patients and administer more tests. This is done for reimbursement purposes in a system dominated by insurance. Hospitals that pay doctors a salary and focus on rewarding value have been shown to produce healthier patients at lower costs. The field of medicine attracts some of the most altruistic people in our country, which are being turned into for-profit businessmen.

Health insurance is almost universally subsidized, through taxes and employers. Since the user doesn't see the real cost of insurance, they don't feel like they're paying for it. This creates another mis-aligned incentive. Insurance companies are seen as an endless source of money to be tapped, and users have no financial incentive to minimize costs. This has contributed to higher premiums that are mostly passed on to the subsidizers. Besides business model, the bankruptcy at GM was largely the cause of health insurance entitlements, and the outsourcing of US jobs is directly related to the rise of health care costs. This problem can largely be addressed with a sense of public service and morality, but in a system where every player is a for-profit company (including the doctor) who can blame them?

The proposed idea that the US should not reform because it would introduce rationing is baseless. Currently tens of millions of uninsured people cannot afford to use the health care system, and insurance claims are denied at the whims of the insurance company. The US currently practices rationing, and the death panel is the insurance company bureaucrat looking for financial gain. This leaves sick people financially destitute and relying on emergency services that are ultimately paid for by all. The idea of writing advanced directives is undeniably a good idea and doesn't provide an incentive for what the directive is.

We currently have a system of public schools that are free. The collective efficiency of the system means that the cost to tax payers is about $5 thousand per child per year, as opposed to $7 thousand for private schools. 85% choose to send their children to a public school for free, while 10% choose to spend $7 thousand for an education that is slightly better. The same reasoning goes for public universities. Compare tuition of $5 thousand at a state school to $40 thousand at a private one. If a system of public education did not exist and was proposed in today's political situation, it would be fiercely debated and likely shot down while being accused of state indoctrination.

A system of state hospitals would function on similar principles to public schools. Doctors could still operate private practices and charge anything they like for the best care around, but when presented with a free service of moderate quality and an extra few hours of waiting, I'm willing to bet the majority of Americans would choose it over paying $10 thousand every year. The cost of such a system would be dramatically lower per capita, but would come mostly through taxes instead of service fees and insurance premiums. The system would also allow businesses to hire more employees because of the lower overhead.

"Follow the money." The current US health system is making certain people extremely rich. The bloated overhead of the system represents real people doing real jobs. If the system is reformed and the $2.3 trillion we spend is reduced by roughly 20%, that means two very important things: anyone with a shrinking share of the pie will violently oppose reform and throw incredible amounts of money around to prevent it, and millions of people currently sitting in cubicles denying you care will be standing in the unemployment line. Neither of these points have been acknowledged in the public debate, but be sure that everyone in Congress is aware of it. Neither of these points are a valid reason not to reform.
Posted by Bryan
Email ThisBlogThis!Share to TwitterShare to FacebookShare to Pinterest