The Eradication of Racism in America 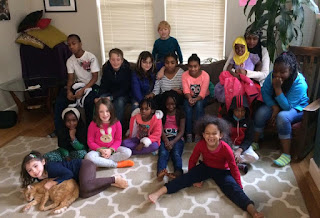 In response to "the critical nature" and "historic opportunity" presented by this "pivotal juncture in our nation's history", the National Spiritual Assembly wrote to the American Baha'i community on February 25, 2017 to reinforce the principle of the oneness of mankind, the chief and distinguishing feature of the Faith Baha'u'llah. In the letter, the National Assembly wrote that "in the decades ahead, Baha'is will contribute in an ever more effective way to the eventual eradication of racism in our country."

We live in an exciting time. At first glance things are going poorly. America is stratifying by race and class, a xenophobic militarism just swept into power, and the government is gearing up to dissolve consumer protections and unleash thousands of police to round up minorities. Mosques, synagogues, black churches, and their followers are being targeted, harassed, or killed.

If this were not the case, those attitudes would still be laying dormant in 40% of America, just stewing. Does this wave of injustice represent the beginning of a long reign of terror, or the last throws of a white nationalism that must be eradicated to move the nation forward? Can you honestly believe that open and ugly racism is going to be the new norm? Absolutely not! And why? Because it is not the truth!

The truth is that all humans share the same special capacity to know and love God. The best of people are those that manifest God's virtues and practice hospitality, respect, justice, service, and uprightness. Any ideology that does not recognize this truth is doomed to failure. Racism and nationalism are variations of the same thing. They represent a group of similar people trying to (sometimes violently) promote their own interests over others.

The vast majority of Americans sincerely desire justice for all races and a cooperative relationship with other countries. They will prevail, and the current trends will only demonstrate the falsehood of racism and nationalism. Their access to power will hasten their end.

The world is more united than ever, politically, economically, and socially. According to Baha'u'llah, the attainment of a united world civilization is the inevitable conclusion of our evolution. It will happen. Anyone swimming against the current will only serve to inadvertently provide opportunities to advance unity.

Taking advantage of those opportunities, Baha'is see their message of race unity ever more relevant and want to act. The task of transforming a society is no small task. According to the letter from the National Assembly, there are three broad categories of action that were previously identified by the Universal House of Justice:
At the core of transformation are activities designed to educate. Baha'is have been advancing courses on spirituality around the world for several decades now. These increase spiritual perception, discuss purpose in life, and study the many facets of Baha'u'llah's revelation. The study of Baha'u'llah's teachings is essential for the individual transformation that must accompany the societal transformation.

Improving the lives of others flows naturally from the study of the text. As service projects become more regular and complex, they will take on a more formal character and be able to tackle much greater problems.

As experience and insights grow, those engaged in community building using Baha'u'llah's teachings will inevitable engage in the discourse of society. Through books and art, conferences, social media, and a variety of outlets, we can show a model that abandons the language and assumptions holding back society. A model of appreciating racial and national diversity will inevitably attract souls from all walks of life and advance a new culture.

There you have it, an outline for Baha'is to contribute to the eventual eradication of racism in America, in particular between black and white. We live in an exciting time.

The letter concludes on a positive note.


"We believe in the fundamental goodness and decency of the masses of our fellow-citizens. We are confident that Americans yearn as we do for spirituality, that they desire genuine justice and prosperity for everyone. We are assured that America's role on the world stage, however significant it has so far been, will in the future be more distinguished and praiseworthy, not because of any inherent superiority it now possesses but to the degree that its present gloom is dispelled by the Light of Baha'ullah's Revelation."