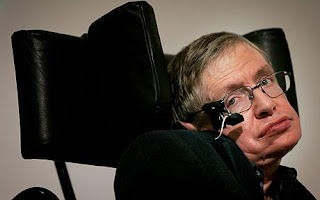 As you may or may not already know, famed physicist Stephen Hawking has recently weighed in with some thoughts on God's role in the origin of the universe. I think these statements provide a fruitful opportunity to explore statements of Baha'u'llah regarding the unknowability of God and the eternal nature of the universe.

In his latest book, The Grand Design, an extract of which is published in Eureka magazine in The Times, Hawking said: “Because there is a law such as gravity, the Universe can and will create itself from nothing. Spontaneous creation is the reason there is something rather than nothing, why the Universe exists, why we exist.”

He added: “It is not necessary to invoke God to light the blue touch paper and set the Universe going.”

It seems to me Dr. Hawking’s statements tend to confirm Bahá’í teachings and can help purify a Bahá’í understanding of physics from some unwarranted assumptions introduced from the heritage of Christian theology.

One assumption we don't need is that the universe has a definite beginning within time, and that God has, at a certain point, set it in motion. If the big bang was the result of an already existing law of gravity then there doesn't seem to any longer be a historical limit on that's law's age. This fits rather well with words of Baha'u'llah on the topic.


As to thy question concerning the origin of creation. Know assuredly that God’s creation hath existed from eternity, and will continue to exist forever. Its beginning hath had no beginning, and its end knoweth no end. His name, the Creator, presupposeth a creation, even as His title, the Lord of Men, must involve the existence of a servant.
Gleanings from the Writings of Baha'u'llah, LXXVIII p. 150

Another assumption we can do without is that God is a substance, just as we might say iron is a substance or a toothbrush has substance. I think such an idea goes against Baha'u'llah's statements that God is unknowable. Such a profound concept doesn’t just mean he is way “up there” and we’re “down here.” Perhaps, it means that God is not a being that happens to be distant or unreachable, as if, for example, his substance existed in a closet in my basement but I can’t find the key, but that instead he is heterogeneous to being itself. If God is “unknowable” then it is only logical to expect that he would not show up within the domain of physics. My understanding is that Stephen Hawking is trying to discredit the idea that science can identify a role for God within the realm of what can be known through scientific research. If that’s the case, then I think it makes sense to say Bahá’u’lláh wholeheartedly agrees! In the same passage, Baha'u'llah writes,


[T]he habitation wherein the Divine Being dwelleth is far above the reach and ken of any one besides Him. Whatsoever in the contingent world can either be expressed or apprehended, can never transgress the limits which, by its inherent nature, have been imposed upon it. God, alone, transcendeth such limitations. He, verily, is from everlasting. No peer or partner has been, or can ever be, joined with Him. No name can be compared with His Name. No pen can portray His nature, neither can any tongue depict His glory. He will, for ever, remain immeasurably exalted above any one except Himself.
Gleanings from the Writings of Baha'u'llah, LXXVIII p. 150-1

It seems to me that anyone hoping for scientists to find God in the order of the Universe are barking up the wrong tree.  He is nearer to us than our life vein. But that doesn't necessarily mean we could ever point to him with a set of scientific theories.
Posted by Mr. Cat
Email ThisBlogThis!Share to TwitterShare to FacebookShare to Pinterest