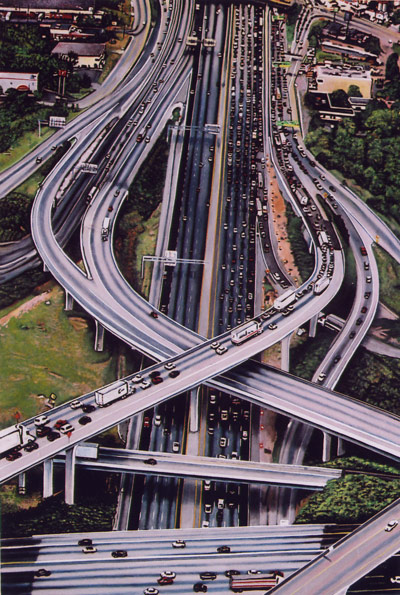 It seems to me that one of the greatest impediments to the social and economic development of the United States is that we have convinced ourselves that we are a "developed" nation alongside nations that conversely are "undeveloped" or "developing." Besides taking a narrow ethnocentric view of what prosperity looks like, to regard the United States as developed is to situate the entire process in the past tense. And that it seems to me is a problem. We are, so people say, no longer developing. We are already developed. To describe American society in this way, I believe, stunts our collective capacity to recognize shortcomings and search for improvements in the way we live. This is important because clearly the United States is in need of a lot of improvement.

Our education system is pretty good. But it does more to help students adjust to a mediocre social system than to contribute dynamically to the progress of our communities. Our medicine is the most technologically sophisticated in the world, and we have won major victories against smallpox, polio, malaria, and other ailments. But clearly, we could all be living much healthier lifestyles. Nobody has better roads than the US, but the success of our car-based transportation system impedes us from moving it in a direction that is more ecologically sustainable and accessable to the poor. Many of these are problems that have been well-known for at least a generation. However, little seems to ever get done. And the social and political institutions assigned with addressing these issues seem less and less capable of guiding the nation in a positive direction. Past achievements are great. But continuing progress has become increasingly elusive.
In order to make the process of development more dynamic, I think we need to conceptualize it as something that is always on-going and never complete. The focus then should be on constant and effective movement rather than whether or not certain narrow goals have been realized. I think, Baha'u'llah goes a long way to give us such a vision. In one passage selected in Gleanings from the Writings of Baha'u'llah he touches on this theme.

O Kamal! The heights which, through the most gracious favor of God, mortal man can attain, in this Day, are as yet unrevealed to his sight... All men have been created to carry forward an ever-advancing civilization. (GWB CIX)

There are two things I'd like to point out about these two lines. First, humanity's future achievements were not yet revealed to Baha'u'llah's generation. Our thinking about development cannot be constrained by the narrow vision of one generation's expectations. Second, the civilization for which all men have been created is ever-advancing. It's always moving. It's always scaling new heights. It never settles for the standard of living achieved at one stage in a community's development and decides to rest on its laurels.


Since, then the Baha'i world has built on the vision sketched out by Baha'u'llah. In 1993, the Universal House of Justice approved a document entitled Baha'i Social and Economic Development: Prospects for the Future. One of its most notable sections outlines "the greatest concern of Baha'i projects."

It has often been said that development is not a product to be delivered by the developed" to the "underdeveloped." Rather it is a process the main protagonists of which have to be the people themselves. The greatest concern of Baha'i projects has to be the development of the friends capacity to make decisions about their spiritual and material progress and then to implement them.

Rather than identifying development with the progress of a pre-determined material program (GDP, steel production, availability of consumer goods etc.), this document identifies it with the capacity of participants to make decisions and implement them. Baha'i-inspired development looks to develop spiritual qualities needed for social progress. In this way, spiritually empowered members of the community become the driving force of the process rather than the material resources they have accumulated. In this approach, if a community is dependent on outsiders to guide projects, or if it is mired in outmoded ways of doing things, then its continued development requires that it become more dynamic. And to the extent that a community can consult productively on issues of public interest, educate themselves, formulate plans of action, and carry them out effectively, we can say that that community is advanced in its process of development. What matters is not so much that a particular set of material outcomes is achieved, but rather that a community can determine for themselves what outcomes should be pursued, and can work effectively to achieve them.

Certainly, American society has many great achievements. People all over the world will testify to this. Nonetheless, if development is measured not by achievements but by the capacity to address social issues, one has to wonder: Has the United States of America become a backward nation?
Posted by Mr. Cat
Email ThisBlogThis!Share to TwitterShare to FacebookShare to Pinterest