In Praise of Islam 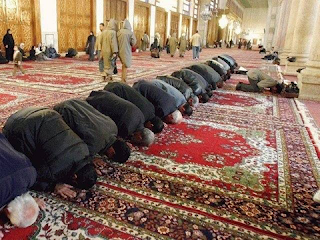 It’s been a hard month for Muslims in the United States; and I’m tired of seeing Islam presented as the Other; whether that’s as the Other to be feared and condemned or the Other to be merely tolerated and respected. I’d like to see some full-throated admiration of the Faith. And at this point, I know that’s not going to come from the US media. So here are two things, among many, that I love about Islam. I invite readers to share in the comments section aspects of Islam that they admire.

First off, let’s consider the call to prayer. For those of you who aren't familiar with it, the call to prayer is a series of statements chanted publicly five times daily, in modern times over loudspeakers, calling Muslims to perform the designated prayers for that period of the day. Where it is performed, the call to prayer configures public space around a common impulse toward worship. It weaves inspired testimony (statements such as “There is no God but God” and “Muhammad is his Messenger”) with musical intonation in a public performance conjoining spiritual and material excellence. On a personal note, I find this vastly preferable to the way consumer advertising floods public space with its ugly incitements to superficial pleasures.

Secondly, the act of prayer in Islam is not just something one says or reads. Prayer is tremendously physical as well. Whether standing, raising one’s hands, bowing, sitting, or prostrating oneself on the floor, the act of prayer is felt throughout the body. This characterizes not only Islamic prayer, but Bahá’í prayer as well. Bahá’u’lláh writes in one place: Thou seest, O my God, how my spirit hath been stirred up within my limbs and members in its longing to worship Thee and in its yearning to remember Thee and extol Thee. Soul and body are not alienated from each other. Rather they are stirred by a common experience of worship.

Obviously, there’s a lot of things not to like that occur in many Muslim communities. And none of us are blind to the fact that truly horrific crimes are often preached in the name of Islam. But as a society, the United States could really benefit by taking a broader perspective on the Faith. There’s a lot to like, even prefer, in Islam; and we would do well to try to learn from our Muslim brothers and sisters.

On an end note, here's a well titled recording of the call to prayer.