Chronic Unemployment and the Oneness of Humanity 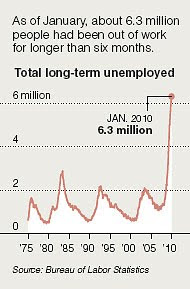 As the chart to the left shows, the number of workers in the US who have been unemployed for six months or longer has risen drastically in the past two years. Not only is it hard to make ends meet when a paycheck hasn't come in for so long, chronic unemployment has long-term effects on a person't ability to lead a happy fulfilling life.  Here are two links related to the situation. The first is an issue brief  put out by the Economic Policy Institute in 2004. The second is a link to an article in the New York Times on the mounting crisis of long-term unemployment in today’s economic downturn.
This is from the Economic Policy Institute.

The long-term unemployed face a particularly daunting array of hardships: after six months of unemployment, many workers have eroded their savings, increased their levels of family stress, and even been forced to move out of their homes. Simply put, unemployment lasting six months or more is a prolonged burden on job seekers that detrimentally affects all areas of life, even more so than short spells of joblessness. While the prospect of any period of unemployment is disconcerting for many workers, the threat of long-term unemployment during the current economy's failure to generate the necessary number of jobs has elevated anxiety levels among U.S. workers.


The hardship long-term unemployment brings upon people is bad enough. But on top of that there's also the structural issues that bring it about in the first place. In the New York Times link, we read:

Most of those who are unemployed for six months or longer are people who really want to be productive members of society. But unless they want to work without compensation, the basic set-up of the American economy doesn't allow them to generate wealth. Right now, we're at ten percent unemployment in the United States. That's ten percent of the work force that wants to be productive, but isn't allowed.

One common mistake people make when they think about recessions is that the economy is much poorer as a result. In a way it is. Productivity does decline, and people lose their livelihoods. But that’s not because capacity is lost. It’s because capacity isn’t being used. Factories sit idle as fewer orders come in. Skilled workers sit at home and do nothing, because nobody’s willing to pay them for the work they do best. Without money, consumers don’t have the means to purchase all the things the rest of society is capable of producing but doesn't. Economic life is a system of exchange. But when exchange slows down, the work of society stops.

I think one of the big drivers of our economic woes is an assumption that money is the driving force in economic life. Prosperity in that case means to accumulate money and to spend it. However, money is just an instrument that facilitates the exchange of goods and services. The power of work is the driving force of economic prosperity. Part of that work is done by machines; another part by humans. But when that work doesn’t happen, society suffers as a result. It seems to me that this misconception springs from focusing too much on material possessions and not on other people and the needs that bind us together into a community. When the commanding heights of the global economy are dominated people looking to maximize shareholder value (and thus their individual ability to cash out) and not meeting the needs of the society, then we get this situation in which a powerful elite is accumulating absurd amounts of money by doing things that harm the  broader society.

There are lots of technical remedies that can be applied to this problem. Individuals in business, economics, and economic policy are well placed to develop and implement them. But beyond that, we also need collective spiritual regeneration. We need to reframe the discourse surrounding material wealth and the relations with others into which it draws us. Every little bit counts. We need a people-based society, not a goods-based society. We have been created by one God, who has placed us on one planet to live with each other in community. Humanity is one. And happiness is ours if we make that the basis of our shared existence.

In conclusion, I offer these two passages from ‘Abdu’l-Bahá’s The Secret of Divine Civilization. I think they give us a good sense of the spiritual changes we need to see.


It should not be imagined that the writer’s earlier remarks constitute a denunciation of wealth or a commendation of poverty. Wealth is praiseworthy in the highest degree, if it is acquired by an individual’s own efforts and the grace of God, in commerce, agriculture, art and industry, and if it be expended for philanthropic purposes. Above all, if a judicious and resourceful individual should initiate measures which would universally enrich the masses of the people, there could be no undertaking greater than this, and it would rank in the sight of God as the supreme achievement, for such a benefactor would supply the needs and insure the comfort and well-being of a great multitude. Wealth is most commendable, provided the entire population is wealthy. If, however, a few have inordinate riches while the rest are impoverished, and no fruit or benefit accrues from that wealth, then it is only a liability to its possessor. If, on the other hand, it is expended for the promotion of knowledge, the founding of elementary and other schools, the encouragement of art and industry, the training of orphans and the poor—in brief, if it is dedicated to the welfare of society—its possessor will stand out before God and man as the most excellent of all who live on earth and will be accounted as one of the people of paradise. p. 24-5

And the honor and distinction of the individual consist in this, that he among all the world’s multitudes should become a source of social good. Is any larger bounty conceivable than this, that an individual, looking within himself, should find that by the confirming grace of God he has become the cause of peace and well-being, of happiness and advantage to his fellow men? No, by the one true God, there is no greater bliss, no more complete delight.       p. 2-3

Posted by Mr. Cat
Email ThisBlogThis!Share to TwitterShare to FacebookShare to Pinterest