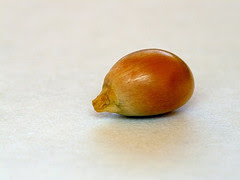 When sharing the Baha'i Faith with others, it's always important to build on commonalities between differing points of view rather than going into attack mode. For that reason, I'm always trying figure out what kernel of truth can be found in a person's viewpoint, even if I don't agree with their conclusions. When this approach is taken, it is easier to see adoption of Baha'i ways of thought and practice as a stage of development in one's own way of thinking, rather than a replacement of one way with another. I think this helps to see the unity between things rather than set up articifical barriers such as secular vs. religious or Baha'i vs. Christian. I had this in mind one day as I saw a particularly crass advertisement for a restaurant/nightclub. After registering my disgust, I wondered to myself if there was a kernel of truth to be found in the materialism that establishment promotes? It occured to me that, yes, there is in fact some basis here upon which Baha'i ideas could build.

It's not enough to make me want to visit the restaurant. Nonetheless, it is Baha'u'llah who writes,


Should a man wish to adorn himself with the ornaments of the earth, to wear its apparels, or partake of the benefits it can bestow, no harm can befall him, if he alloweth nothing whatever to intervene between him and God, for God hath ordained every good thing, whether created in the heavens or in the earth, for such of His servants as truly believe in Him. Eat ye, O people, of the good things which God hath allowed you, and deprive not yourselves from His wondrous bounties. Render thanks and praise unto Him, and be of them that are truly thankful.

Gleanings from the Writings of Baha'u'llah CXXXVIII p. 276

It seems to me that this is a materialist doctrine, certainly not an atheist doctrine, but rather one that situates enjoyment of this world within a life of gratitude towards God. The defining aspect of this materialism is that the good things of this world become bridges rather than obstacles to worship of God. So on the one hand it is possible to enjoy this world and become forgetful of God. But on the other, it is possible to see in those good things the working of divine providence and as a result give praise to the one who brought them about.

In light of this, I'd like to revisit a popular passage from the recorded utterances of 'Abdu'l-Baha. It comes from an address he gave on 6 July 1912 in New York. Most people who know these words are familiar with them because of their prominent place within Ruhi book one's third unit "Life and Death." By comparing life in this world to life in the womb, 'Abdu'l-Baha provides a lucid framework for thinking about the relationship between this world and the next.

In the beginning of his human life man was embryonic in the world of the matrix. There he received capacity and endowment for the reality of human existence. The forces and powers necessary for this world were bestowed upon him in that limited condition. In this world he needed eyes; he received them potentially in the other. He needed ears; he obtained them there in readiness and preparation for his new existence. The powers requisite in this world were conferred upon him in the world of the matrix so that when he entered this realm of real existence he not only possessed all necessary functions and powers but found provision for his material sustenance awaiting him.

Therefore, in this world he must prepare himself for the life beyond. That which he needs in the world of the Kingdom must be obtained here. Just as he prepared himself in the world of the matrix by acquiring forces necessary in this sphere of existence, so, likewise, the indispensable forces of the divine existence must be potentially attained in this world.
Promulgation of Universal Peace p. 225-226

Usually, when I hear this passage discussed the focus is on preparation for life in the next world. But that's just part of it. It also says quite a bit about life in this one. In the womb, humans develop capacities needed for life outside of the womb. Outside of the womb, humans use those capacities and develop others that will be needed for life after the death of the body. A person's life is spent in preparation for the next world. And just as importantly, it is one in which she uses capacities she developed in the previous world. Humans live for both this world and the next.

This is the framework within which I think we can rethink materialism. We need not set up unnecessary oppostions between the material and the spiritual or between this world and the next. They are all aspects of one common journey. Just because a person indulges in material pleasures doesn't mean she's "unspiritual" or that she's on the wrong track in life. In light of the above quotations, we might say she has a great deal of understanding, but that she only has part of the picture. Her materialism is not something to be discarded, but rather something to be refined and built upon.

I think this framework can also be very useful for thinking about questions of social and economic development. As I've expressed before, I think the dominant approach to development is premised upon a subconscious desire to flee from the thought of death, and that this causes unnecessary spiritual frustration inasmuch as death is an escapable feature of life. By assuming the harmony between life in this world and in the next, development projects employing a Baha'i approach can work towards the material transformation of this world, and at the same time foster reflection on the reality that all of us will at some point disappear from it.
Posted by Mr. Cat
Email ThisBlogThis!Share to TwitterShare to FacebookShare to Pinterest